CDS prevents and cures Covid19.  Medicinal Chlorine dioxide solution (CDS) is 1% Chlorine dioxide and 99% water,  safe to ingest and very different from chlorine based cleaning products.  CDS has saved many thousands of lives; and could save many more if governments permitted doctors to give CDS to their Covid19 patients.

CDS is a valid treatment for Covid19

If hundreds of people saying that CDS has worked for them amounts to proof, then CDS (Chlorine Dioxide Solution) is a proven cure for Covid19.  see 170+ say CDS works.

This blog includes links to numerous independent doctors who all confirm that CDS is a life saver.  see Doctors trust in CDS.   CDS is also supported by COMUSAV, an association of over 300 doctors, mainly from Latin America. Click COMUSAV for their report translated into English. The original report waas written in Spanish.

CDS is known to help a range of conditions from Arthritis to Autism to Alzheimers.  It is not a new medicine.   It is a safe medicine, as verified in a 2017 study, where mice were given large doses of CDS and had no side effects.  see CDS Safety Evaluation

Chlorine dioxide CD is  the original MMS, which you take mixed with water.  You can also use it a spray to disinfect the throat or cuts.

Chlorine dioxide solution  CDS, developed by Andrea Kalcker, is CD gas dissolved in water, which is easy to digest.  Plain CD can often cause upset stomach  and nausea.  The standard dose is a litre of solution per day, taken 100 ml/cc at a time.   The litre is made up of 1% CDS and 99% water. Anyone who claims that CDS is about drinking bleach is spreading misinformation.

The following image comes from Andreas Kalcker’s website, which shows clearly how  Chlorine dioxide solution should be used. You can buy his must-read book “Forbidden Health” in Paperback or PDF format.   from www.voedia.com. 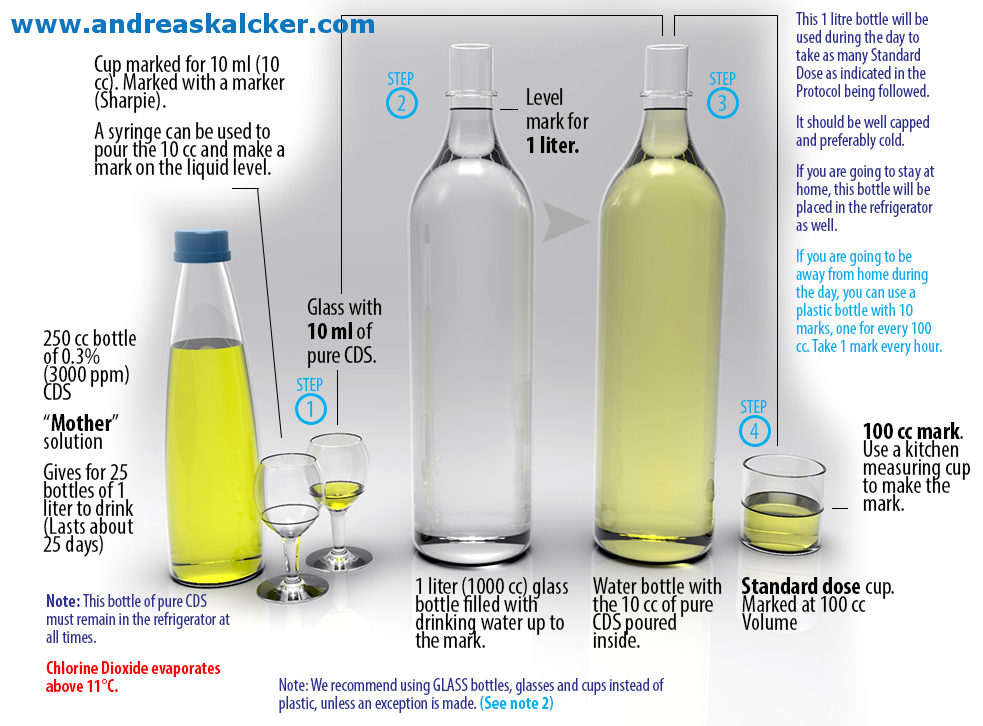 Click AndreasKalker  to go to the official web site.  scroll down, select your language and click on the left image to see a video on How to make CDS.  It is an easy process.

Nevertheless, most governments prohibit doctors from treating their patients or themselves with CDS, on the basis of arguments based on opinion not on experience.

If governments persist in prohibiting the use of CDS to treat Covid19 in the light of what we now know of CDS and Covid19,  they would be acting negligently at best.   If CDS is not available, many lives could be lost this winter unnecessarily.